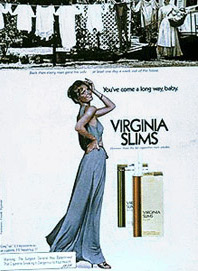 This was published in 1978. The image at the top is a photograph of a woman hanging laundry outside.

The ad text reads: “Back then, every man gave his wife at least one day a week out of the house. You’ve come a long way, baby. Virginia Slims – Slimmer than the fat cigarettes men smoke.”

Times have sure changed for women, not only around smoking but in society as a whole. In the 50’s, women’s goals were to get engaged before they went to college (They went to college to get a degree, just in case you had to get a job, most never used them), college was the place to find your husband. Women were to assume their proper place as a wife and a mother. She was expected to be pretty, cheerful, never be moody or serious or smart.

We have come a long way….. Yet in the World War II years, the men commented that the girls they left behind were doing the job they left behind. They were working in factories, building the tanks and airplanes that was vital to the war effort. By the early 50’s, ladies had swapped tanks for typewriters and mimeograph machines. Women in the workforce was increasing but they were almost always low paying and dead end jobs. There was even help wanted ads for men and separate ones for women.

It was so bad for women that if they wanted to be something more than a good mother and wife they were not normal. If they wanted a career they were thought to be weird. Most women had great educations but felt that there were no avenues out there for them, it was a mans world.

• 4 out of 5 businesses are started by women.

•Women entrepreneurs are much more likely to choose to start and run small businesses in the retail and service sectors.

•Women in business perceive more barriers to doing business than their male counterparts.

•The majority of majority women-owned firms (85 percent) are micro-businesses employing fewer than 5 people.

So we have come a long way, but there is still stereotyping out there and some women do not have the confidence that they can play at the same level as men. And there’s more;

“Where women differ from their male counterparts is how they view growth. Women business owners view growth to be less important, less likely and of lower value than men. They view the personal demands related to growth as negative and adding stress to their lives. An overwhelming 84% of women feel their business has reached a size they are comfortable with and don’t want to grow. This compared to 37% for men.

They feel they lack the managerial experience, spousal support and peer support networks needed to grow. This is why so many women networks are starting up!

According to a CIBC Small Business Outlook Poll, “on average, revenues generated by women-run businesses are significantly lower than those seen in businesses operated by men. A third of all enterprises run by women generated less than $50,000 in annual revenue, double the number among firms run by men, the survey said. At the same time, more than 20 per cent of firms owned by men generated annual revenue of more than $500,000, almost double the number among women.”

“In addition, women, unlike men, said they would be better off financially if they were working as employees rather than as business owners. When asked whether they were making more money than they would if they worked for someone else, female entrepreneurs were much less likely to agree (38 percent) than their male peers (55 per cent), the survey found.”

Okay – this last one really got me! Although women have a come a long way – there’s still work to do with women and money!

Let me ask you this; Did you start your own business to have all the freedom, flexibility, fulfillment, family-time, and fun that life has to offer? But – lately you’ve realized that you’ve traded them all in for frustrated, frazzled, and freakin’ tired?!

You may even find yourself compromising the things you value the most because you’re not working with enough of the right customers, you’re having problems keeping yourself accountable, sales are down, or you just don’t have much free time to breathe.

You’re possibly short-changing your family, friends, and employees, as well as yourself. There is no fun in that!

I have worked in a male dominant industry; financial services, for over 18 years. In 2005 I left the corporate company making 6 figure income and started my own business, from scratch, $0 income. Within 2 years I was earning the same money, but this time I was honouring and living true to my values and beliefs. I focused on educating and empowering women because we still have a long way to go to rebuild our confidence in ourselves and our relationship with money.

Women in business today can be really hard on themselves and get in their own way of success. Some even unknowingly self-sabotage their success. It has a lot to do with your upbringing and beliefs. But how do you change?

I know that you are a smart woman with a vision, you’re working hard, and yet you might not have all the success you want. Well why not? Consider this: Your life right now is structured to create what you already have, and if it is not what you envisioned or hoped for then there are gaps and ‘lack of structure’ to create an amazing vision of you being successful. If it were, you’d already have it! It’s okay, when you know better you’ll do better.

I want to help you. My goal is to help you make that shift  from poverty thinking to prosperity thinking so that you can attract more money into your business.

Take advantage of booking a complimentary session with me HERE

Life is short….don’t settle for mediocre!

Please enter your e-mail address. You will receive a new password via e-mail.